Operations commenced on 30 August, 2011 with the commissioning of the fleet's first ship, HMS Merlin (CA-270) in Minneapolis, founded and commanded by then-CAPTJG John Neitz.[1] 30 August is still observed annually as "Gryphon Fleet Day," and Merlin bears the title "First in the Fleet." 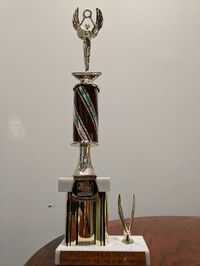 2012 saw further Twin Cities expansion with the crew of Merlin transferring to the newly commissioned battlecruiser HMS Invincible while then-CAPTJG Grays and part of the Samurai crew took over Merlin and then-CDR McTavish took command of Samurai. The Third Space Lord referred to this as "The Great Re-Juggling" and the resultant group of three ships were united as Cruiser Division 211 with Naval Directive 12AP-03 on 15 April 2012. This was the the first-ever formation of a multi-ship unit (other than a fleet) in TRMN, and was the predecessor of Battle Squadron 1.

CruDiv 211 hosted their first party room at CONvergence 2012, which was the public debut of the missile pod, and recruited new members there who went on to found HMLAC Superior (LAC-004) in Duluth, MN (launched October 2012), as well as a chapter in Marquette, MI, which relaunched the newly available Kodiak Max (launched September 2012).

All naval personnel in the Second Naval District not on a ship's crew roster are assigned to HMSS North Star (SS-102) as their holding chapter.

DesRon 265 is under the command of CAPTJG Sir Paladin Meyer, and is assigned to Task Group 21.1. This Squadron is comprised of 3 destroyers and a heavy cruiser command ship, located northwest of the Twin Cities.

TF 22 is under the command of CDRE Sir Sherman Day, GCE, SC from his flagship HMS Demon, and consists of ships located in Illinois, Indiana, Michigan, Ohio, Kentucky, and Ontario. The Task Force carries a LAC wing and three task groups as subordinate echelons, including Cruiser Division 711.

CRuDiv 711 is under the command of CAPTJG Kevin Johnson, and is assigned to Task Group 22.3. This Squadron is comprised of 2 heavy cruisers located in southwest Ohio:

All Royal Manticoran Marine Corps personnel in Second Fleet are are nominally part of the Second Expeditionary Force. The expeditionary force has not been officially established as a command.