From TRMN
(Redirected from RMA)
Jump to navigation Jump to search 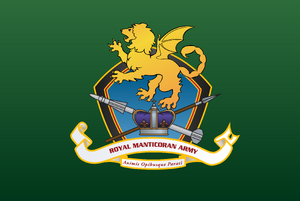 Office of the Adjutant General

Also part of army headquarters is the Office of the Adjutant General.

The Adjutant General issues operational orders for RMA chapters and oversees the Commanding Officers of the following corps:

The headquarters for the RMA is King William's Tower, and that place name serves as a synecdoche for RMA's top leadership.

Army Directives expand upon or amplify Admiralty Orders. They are applicable to the Royal Manticoran Army's policies.

The RMA's operational units are assigned to a numbered army based on their locations. The areas of operation for these numbered armies are coterminous with the areas of the Naval Districts of the RMN.[2] The armies and their headquarters forts are:

Atmospheric and close-orbital forces are part of the RMA. The right shoulder patch for Aerospace personnel has a two-colored background, representing a planet and nearby space.

RMA branch members of TRMN who are not members of a chapter are assigned to the 1st Regiment of Foote, which is the RMA's Holding Chapter.[5]

Main Article: Royal Manticoran Army Awards Some awards, such as the Parliamentary Medal of Valor, are issued to qualifying personnel of Manticoran military branches.

In other cases the RMA has awards that are distinct from, but parallel to those of the Royal Manticoran Navy and Marine Corps. Several, such as the Meritorious Service Medal, have the same name but a different colored ribbon for the RMA.

Additionally, in TRMN the Marshal of the Army is the awarding authority for the Royal Household Distinguished Service Medal, which is awarded to civilians and military personnel of all branches.

The RMA awards the all-metal Weapons Qualification Badge for qualifications in various weapons, as distinguished from the ribbon suspended medals awarded for marksmanship in the RMN and RMMC. The ranks, in ascending order, are Marksman, Sharpshooter, Expert, and High Expert, and qualifying weapons include rifle, pistol, plasma rifle, and tri-barrel.[6] 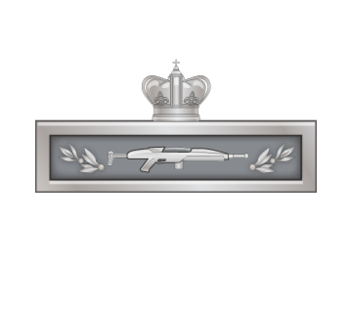 The Combat Infantry Badge (CIB) is awarded to TRMN personnel though qualifying activity in marksmanship, charity, academics, and event participation. [7]

The Monarch's Own is the elite royal guard regiment of the RMA. In TRMN, membership in the Monarch's Own serves as an honor society for RMA members,[8] similar to HMS Unconquered crew in the RMN and RMMC.

Chiron House is the honor society of the King Roger I Military Academy.

Membership in the Queen's Club is offered to Officers of the Star Kingdom of Manticore and the Grand Alliance who have completed qualifying courses in the King Roger I Military Academy. 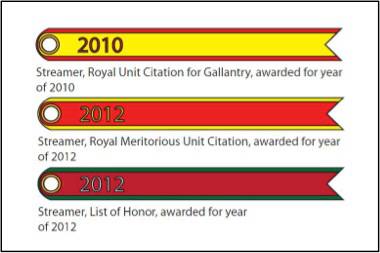 RMA units may be awarded the following, which take the same form as in the RMN:

RMA units may fly a streamer from the staff of their unit flag for each unit award received.[9]