The Barony of McCovey Cove is a peerage title awarded by The Royal Manticoran Navy: The Official Honor Harrington Fan Association, Inc..

The title itself is an homage to the inlet of the San Francisco Bay that lies beyond the brick right field wall of Oracle Park.

Coat of arms of the Barony of McCovey Cove 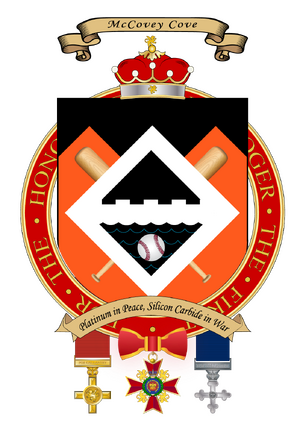 Tenne a chief dancetty Sable two points upwards manifest two baseball bats proper in saltire grips to base surmounted with overall a lozenge Sable charged with a bordure and a fess embattled and counter-invected Argent the base of the lozenge charged with a baseball proper.

The motto is a modern take on the City motto of San Francisco, the city where the Baron and Baroness McCovey Cove first met, and where the Baroness herself was born and raised. It's meaning is that the Barony delivers value to Her Majesty, the Queen of the Star Kingdom of Manticore in times of peace, and directly supports the might of Her Majesty's Navy in times of war. Platinum being a highly precious metal, traded openly within the Kingdom, while Silicon Carbide forms the structure of Her Majesty's Ships. The Baron himself is an Officer in Her Majesty's Navy, and has previously served as the Third Space Lord, to which the Silicon Carbide refers to.

Escutcheon encircled by the riband of the Order of Queen Elizabeth, in which the Baron holds the rank of Knight Grand Cross. Pendant from the achievement are representations, from left to right, of the Saganami Cross, Knight Companion of the Order of King Roger I, and the Osterman Cross. Although the Baron has other achievements within the organization, those three were chosen to demonstrate his recognized service and achievements as an officer (Saganami Cross), as a knight (OKR), and as a senior enlisted (Osterman).

The Baron and Baroness McCovey Cove are lifelong aficionados of the Grayson-famous game of Baseball; their combined love of the game formed the basis of their early friendship that grew romantically. The colors Tenne, Sable, and Argent are used to represent the team colors of the baseball team, the San Francisco Giants. The symbolism of the two points in Tenne represent the Twin Peaks of San Francisco, which are visible from Oracle Park, while the top of the white lozenge represents Mount Sutro. Mount Sutro also holds the towers for all major broadcast centers in the city, and is a nod to the Baroness' work in broadcasting. The white lozenge represents a baseball diamond, and the crossed bats the tools of the game. The embattlement within and the engrailed lines represent the waters of McCovey Cove beyond the barony's wall, while the charge of the baseball proper is representative of the home runs hit over the wall and into the cove waters.

The Barony of McCovey Cove is located on the planet Manticore within the Duchy of the Golden Gate. The cove itself is inset against a large mountain overlooking the bay waters, surrounded on both sides by wooded areas. A large baseball stadium sits on the shoreline, next to the barony's harbor. The baronial estate, known locally as "The Cliff House," is located on the southwestern cliffs of the estate.