An echelon unit is a grouping of two or more ships under the command of one overall Commanding Officer (CO), in addition to their individual ships' COs. In some cases, the unit CO is also CO of one of the component ships.

It is possible for a unit to be a part of a larger echelon and/or subdivided into constituent echelons.

All ships in TRMN belong to either a fleet or a station. In some cases, a station may be a constituent part of a fleet in which it is geographically located, with the station CO reporting to the fleet CO. All task echelons and squadrons are part of a fleet or station.

A fleet is the largest unit type. Fleets are numbered, and most of them additionally have name designations. For example, First Fleet is also known as Home Fleet.

Planet Earth is divided into geographical Naval Districts[1]. Generally, RMN ships located within a district will be part of that district's fleet, unless they are within a station's territory.

The Admiralty may establish a station as a constituent portion of a fleet's geographical area, or as a territory separate from a fleet area. Usually these are areas that have either no ships or only a small number of ships, so would need development in order to become a separate fleet. Stations which contain one or more ships are typically commanded by the senior ship CO on the station.

Task echelons are designated by numbers that are based on their fleet number. The first digit(s) of the task echelon number will match the number of the fleet of which they are a part.

A Task Force(abbrev: TF) is the largest level of task echelon. Usually a TF will consist of all ships located within a geographic area covering multiple states (9-12 hours driving time[2]).

There is not a prescribed rank for a task force CO, but they are commonly commanded by a commodore.

A task forces is designated by a number based on the number of the fleet of which it is a component. Fictional examples:

A task force may be divided into two or more task groups(abbrev. TG). In TRMN there are also some task groups which are not part of a task force but instead report directly to the fleet CO. These have been created to facilitate regional management in an area which does not have enough ships to support a full task force. Typically, a TG will cover an area of one or more states (6-9 hours driving time[3]).

The CO of a task group is usually the senior ship CO in the TG. There is not a prescribed rank, but it is common for a task group CO to be promoted to Captain Senior Grade.

A task group may be divided into task detachments (abbrev. TD) made up of clusters of ships located within geographical areas 4-6 hours driving time[4]. They are commanded by the senior ship CO within the TD.

Task detachment numbers further elaborate on the system established by their larger counterparts:

A task unit (abbrev. TU) is the smallest of the nesting hierarchy of task echelons. It is a cluster of ships within 2-4 hours driving time[5]:

The term Task Element has been used in admiralty orders, but not defined as the above terms are.[6] It may have been used as a generic term to encompass the various levels (unit, detachment, group, and force are all types of task elements).

Ships may also be organized into a squadron, which is a system of organization parallel to, but separate from the system of task detachments outlined above. A division is a portion of a squadron.

Whereas task echelons are "top down" establishments (created by the 1SL and FCO), squadrons are "grass roots" establishments initiated by the leadership of the constituent ships, subject to 1SL approval. Typically this will be a group of two or more ships who have some geographic concentration and an operational affinity (attending conventions and events together).

In canon, Admiralty assigns a newly formed squadron the next available number without regard to which fleet the squadron will be assigned. In fact a squadron may be reassigned to a different fleet or even divided between more than one fleet based on changing operational requirements. For this reason, unlike task echelons, squadrons rarely have a number with a first digit coinciding with that of the fleet of which it is a part. TRMN practice is for the leadership of the constituent ships to request a number of their own choosing, which is subject to the 1SL's approval to make sure it does not duplicate one already in use. 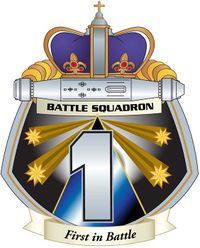 A squadron is a group of ships organized together for administrative purposes, but often also operating as a unit. Squadrons typically consist of two or more divisions of ships. In canon, squadrons are organized from a number of ships (typically eight) of the same type, and named accordingly:

In TRMN, it is possible for squadrons (and divisions) to be formed from more than one type of ship, with the designation usually being based on the type of ship which is most numerous in the unit.

A squadron CO may be the senior ship CO of the squadron, often being promoted a grade above the usual command rank for that type of ship. Some squadrons are commanded by a CO who is not additionally a ship CO.

Squadrons may have crests, as in the illustrated example.

A division is a constituent part of a squadron, commonly consisting of 2-3 ships commanded by the senior ship CO within the division.

Divisions are designated with a number based on the number of the squadron of which they are a component. Example: CruDiv 421 is the first division of CruRon 42.

Whereas in canon, squadrons are first formed and then divided into divisions (meaning there are no divisions without squadrons), in TRMN it is more common to start with a division, because there are rarely enough ships in an operational area to form a full squadron. Thus, TRMN has some divisions which are part of a nominal squadron, since only one division of the squadron actually exists. For example, two neighboring heavy cruisers within a fleet may form CruDiv 421 even though there is not a full CruRon 42 in existence. If the area later grows to support a second division, then CruRon 42 (and a squadron CO) would then be activated.

Like hyper-capable warships, Light Attack Craft (LACs) all are assigned to a fleet and/or station and may be part of a fleet's component task echelon. However, instead of squadrons/divisions, they have their own organization[7]:

The complement of LACs carried aboard a LAC Carrier (CLAC) forms that carrier's LAC Wing. FCOs who have one or more carriers in their fleet may assign LACs in the fleet to a carrier's wing. The wing must have an qualified officer as COLAC (Commanding Officer, Light Attack Craft), who commands the wing and has a minimum rank of Commander.

LAC Groups are assigned a designation based on the fleet number to which they are assigned. Example: The first LAC group in Fifth Fleet is "501st LAC Group," or "LAC Group 501."

LAC Wings and LAC Groups with four or more LACs may be divided into LAC Flights. A LAC Flight contains 2-3 LACs, and is commanded by the senior LAC CO in the flight, who may be promoted to Lieutenant Commander.

LAC Flights are designated within their Wing or Group by letter. Example: First Flight of the 30th LAC Wing is designated "Alpha Flight, LAC Wing 30" or alternately "Able Flight" or "Flight A."

A ship may be part of an echelon unit that is nested within a hierarchy of increasingly larger units, creating a chain of command several levels deep.