The Earldom of Camera Stellata is a peerage title awarded by The Royal Manticoran Navy: The Official Honor Harrington Fan Association, Inc.. The first and current holder of the title is Sir Matthew Parker, who had previously been created Baron Camera Stellata and was promoted to the rank of Earl of Camera Stellata in the 2018 MantiCon Honors List. 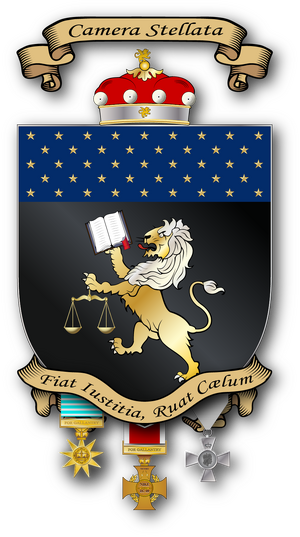 BLAZON: Sable a lion rampant Or maintaining in its dexter paw an open book proper and in its sinister paw a pair of scales Or, a chief Azure mullety Or.

The escutcheon is ensigned with the coronet of an earl of the planet Manticore.

Pendant from the achievement are representations of the Saganami Cross flanked by the Order of Gallantry and the Order of Queen Elizabeth.

The star-covered chief recalls the ceiling of the Court of the Star Chamber in renaissance England. The book and scales of justice allude to the armiger's appointment as Judge Advocate General.