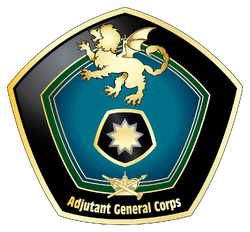 The Adjutant General (abbrev. AG) is a billet within the High Command of the Royal Manticoran Army (RMA).

Army Directive 2201-01 established the AG as part of the RMA High Command.

Army Directive 2201-03 established the Office of the Adjutant General and stated that the following are part of the Office:

The AG issues operations orders under the authority of the Marshal of the Army commissioning and decommissioning RMA units, and appointing command triad members to the units, as the Third Space Lord does in the Royal Manticoran Navy. Royal Manticoran Army policy orders are issued as Army Directives.