The current holders of the duchy are Sir Robert James Jackson KSK, Duke of Karstadt Sea and his wife Margaret Mary Kelley, Duchess of Karstadt Sea. The Duke served as Marshal of the Army, is a member of the Progressive Party in the House of Lords, served two terms as the Lord Speaker of the House of Lords before stepping down to accept the current position as Military Liaison to the Prime Minister.

It was first awarded as a peerage land to MotA Robert Jackson, RMA in February 2012 [2]and elevated Marshal Jackson to the rank of Baron.

In 2015, Karstadt Sea was elevated from a Barony to a County as Marshal Jackson was elevated to the peerage rank of Earl.

On 1 January 2017 the land was elevated from County to Duchy[3] as the then Lord Speaker Sir Robert was elevated to the rank of Duke.

Coat of Arms of the Duke of Karstadt Sea 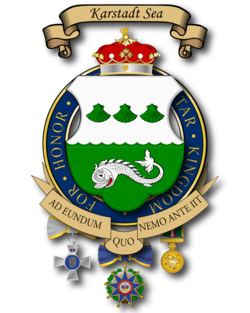 Per fess engrailed Argent and Vert, three escallops in chief and a dolphin naiant in base counterchanged.

The escutcheon is ensigned with a coronet of a duke of the Planet Sphinx.

AD EUNDUM QUO NEMO ANTE IIT (To boldly go where no man has gone before.)

The escutcheon is encircled with the riband of the Order of the Star Kingdom, and pendant from the achievement are the Order's badge flanked by that of the Order of Queen Elizabeth and the Manticore Medal.

The field division (resembling ocean waves), scallop shells, and dolphin all refer to the maritime nature of the Karstadt Sea territory.

“To sing the peaens of any world is a task requiring multiple verses of elegaics, and Sphinx, more so than most, cannot be summed up in simply a paragraph or two”. From the majestic beauty of Sphinxian Mountains in the west, to the white sandy beaches of the Tannerman Ocean to the east; this fullness is matched only by the majestic slow seasons of Sphinx, with rainy springs, cool summers, windy autumns and quiet winters suited to long contemplations." --Karstadt Seas tourism brochure

Karstadt Sea, for which this duchy is named, is situated off Haley's Land, north of the Tannerman Gulf on the Planet Sphinx.

The principal activity of the duchy is the management of its area totaling 5,445 km2. 4,947 km2 of this is in land and 1,044 km2 in water. Nearly half of the land holdings are in the Shire of Brunswick Forest, with other large holdings in Brunswick Town, and Eastport. Financial backing for the duchy is derived from the usual tax base, generous Crown stipend and the Duke’s corporation - Karstadt Group, Ltd.

Karstadt Group, Ltd is a Manticoran multi-industry trans-stellar conglomerate, headquartered on Sphinx, in the city of Tillingham, with operations system-wide as well as interstellar and is listed in the Kingdom Five Hundred.

The Karstadt Lines is a Manticoran shipping, logistics and passenger line corporation. The network of trans-system and trans-stellar shipping services covers all major trade routes and is complemented by an array of inter-system shipping lines.

Crossroads Investigations provides reliable and innovative risk management services and solutions, with designs and continuous upgrades of its services and solutions to protect all areas that pose risk to a business and its operation, both inside and outside of the company. Because of their expertise in every facet of risk management, Crossroads Investigations has become a provider of risk mitigating services for many Kingdom Five Hundred corporations as well as other stellar systems.

Thanks to the cold North Equatorial current, the Karstadt Sea’s inshore waters are home to one of the system’s greatest fisheries. Its keystone is the fast-growing Sphinxian Anchovy. Vast shoals of this distant member of the Earth-like anchovy family feed on up swelling algae; they are themselves eaten by scores of other species of fish. Karstadt Fisheries produces the prized salted and cured anchovy fillets for shipping to markets both on and off-world. The corporation is headquartered in the seaport town of Eastport, with offices on Manticore and Gryphon as well as other systems of the Star Kingdom. Karstadt Fisheries Sphinxian Anchovy fillets are also shipped interstellar to the Silesia Sector.

The Duchy is home to the 6th Sphinxian Grenadier Guards Regiment (Home Guard), known as the “Karstadt Sea Fencibles”. As a Peer of the Realm, the Duke is the Honorary “Colonel” of the unit. There is a recruiting and information office located in the Marketplace of Brunswick Forest. Other companies of the 6th are located throughout the Duchy.

The regimental Headquarters Company utilizes a military base previously used by the 1st Royal Regiment of Foote to provide a security detail for Karstadt Manor when the Duke was serving as the Marshal of the Army. Companies of the 1st RRF would TDY each month from King William’s Tower for duty on a rotation basis. The buildings include barracks, recreational facilities and a motor pool for vehicles.

A “Shire” was a traditional and generalized term for a division of Land used in the pre-diaspora era commonly referred to as “medieval”. In use today, it still refers to a division of land, but one that contains several small, self-governing entities referred to as “Hamlets” or “Villages”, depending on the size of the population. The Shire of Brunswick Forest is one such area and is the home of Karstadt Manor. The Shire has 15 hamlets and villages that dot the surrounding countryside. The village elders who coordinate any issues pertaining to the county to the County Parliament direct local governance. The Marketplace of Brunswick Forest is where most of the local businesses are located, including restaurants, shops, medical facilities and the administrative offices for the Magister and County Parliament. Also in the Marketplace is a sturdy building of stone and wood that has a slightly military air about it. At one time, on perhaps a daily basis, one would see men and women in uniform coming and going. Now that the Duke has stepped down as Marshal of the Army, there is less such traffic, but some still remains. This building, like so many others like it around the Kingdom and Empire, is a facility of “The Queen’s Club”.

Karstadt Manor, with its three wings, is an imposing and yet modest structure. It is not the typical “prodigy house” one would expect for a peer of the Realm. While “manor house” doesn’t really fit the physical appearance, the look is more “country home” (with a wrap around porch), the actual size is close to the expected. The collection of immediate buildings that comprise the “Manor House” sits on 10 acres. This includes the living quarters, offices, aircar facilities, stables and some storage facilities.

While the Duke controls the entire Duchy, the size of his immediate “personal property” is 200 acres. These acres have a shooting range on one side and pasture lands on the other for the horses.

The Duke and Duchess understand that to keep their staff morale up, they must offer stellar living quarters which determine the quality of life and thereby the productivity. These quarters ensure that the Staff is working a their peak with quality places to sleep, relax, stay active and dine.

Living quarters are designed to simulate apartment living. The Basic Single Staff-member quarters includes a bedroom, living/work area, kitchen area, full bathroom, entertainment viewer and provisions for pets. Staffs with families are assigned larger accommodations as necessary. Staff may decorate their quarters according to their individual tastes, as long as it does not violate social norms. The size of the quarters depends on pay-grade and position. In addition to the individual kitchen areas, Staff enjoys a dining area where the Kitchen personnel deliver an array of menu options.