The Imperial Andermani Navy (abbrev: IAN) is one of the alliance navies and a branch option for members of The Royal Manticoran Navy: The Official Honor Harrington Fan Association, Inc. (TRMN). The German language name is Kaiserliche Kriegsmarine. [1]

The IAN is modeled after the organization of the same name in Honorverse canon, which is the space navy of the Andermani Empire.[2]

A characteristic of the IAN which distinguishes it from other TRMN components is the use of German language, including ranks, ship names, and orders. The prefix for IAN ship names is SMS (Seiner Majestät Schiff trans. His Majesty's Ship).

As a component of the TRMN the IAN was originally formed to give our German speaking members a home in the organization that was rooted in the Honorverse Canon. The group grew to include a chapter in the United States. Since then the group has expanded into the second largest Allied Navy in the TRMN with members in Germany, Canada, New Zealand, Australia, and the United States. The service is growing with opportunities for people who are dedicated to find positions in leadership or to start new chapters.[3] 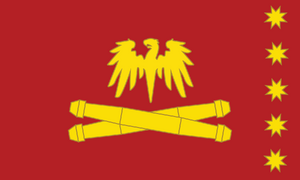 Flag of the Groβadmiral der Flotte

The commanding officer of the IAN is the Groβadmiral der Flotte.

The senior enlisted spacer of the IAN is the Oberstabsbootsmann der Flotte.

The German language rank names for IAN personnel are as follows:[6]

Additionally, there is the rank of Kadett (abbrev. SK for Sternekadett) for officer candidates at the academy, equivalent to the RMN's rank of Midshipman. [7]