David Mark Weber (born October 24, 1952) is an American science fiction and fantasy author. He is the creator of the Honor Harrington "Honorverse" series of novels and stories, which forms the basis for The Royal Manticoran Navy: The Official Honor Harrington Fan Association, Inc.(TRMN). 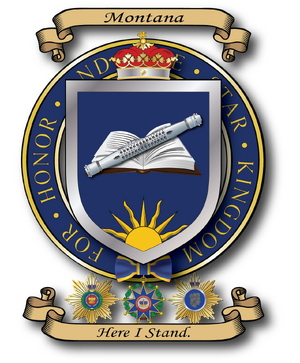 David Weber actively interacts with his fans, including the members of TRMN, of which he is the premier Honorary Member. He has served as Guest of Honor multiple times at TRMN organized conventions, including Honorcon and MantiCon.

As the creator of the Honorverse setting, without which the organization would not exist, Weber has received several honors within TRMN:

Weber previously held the title of Duke of Leutzen Vale[4] before being promoted to the rank of Grand Duke.

David's wife Sharon Rice-Weber (referred to by David as She Who Must Be Obeyed) is also active in TRMN interactions and events, and in addition to being the Grand Duchess of New Montana holds the following honors: