Deprecated: The each() function is deprecated. This message will be suppressed on further calls in /usr/home/vhosts/talbottfleet.org/wiki/includes/MagicWordArray.php on line 197
 Sutherland - TRMN

The Barony of Sutherland is a peerage title awarded by The Royal Manticoran Navy: The Official Honor Harrington Fan Association, Inc..

Sutherland was created as a title on 7 July 2019[1] when LTGEN Lord Michael Houghtaling was created Baron Sutherland at MantiCon in Layton, UT in 2019.

Coat of arms of the Barony of Sutherland 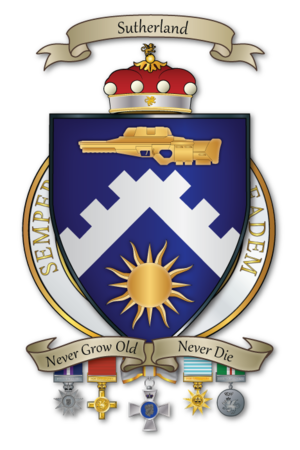 Azure, a chevron embattled argent between a pulse rifle fesswise and a sun Or

The sun in the blazon represents the Star Kingdom, and the embattled chevron represents it's defense. The pulse rifle is the preferred weapon of the Royal Manticoran Marine Corps. 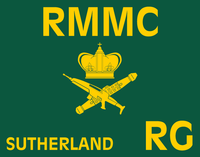 The Barony of Sutherland is located within The Duchy of New Ulyanovsk and is located on the planet Sphinx on the continent of Haley's Land. Part of the Barony borders the Tannerman Gulf.

As with most of Sphinx, the estates of Sutherland is heavily forested. Due to Sutherland being the home of Deputy Commanding Officer of Marine Forces Command, there is a larger than normal RMMC presence within the Barony.

The Barony of Sutherland has the following notable businesses and attractions:

The Boardwalk – A beach side amusement park located in the town of Santa Carla. Be mindful of all the damn vampires.

The baron is the honorary commanding officer of the 105th RMMC Rifle Regiment “The Lost Boys”, the Sutherland Regiment, a small RMMC regiment drawn from personnel from throughout the barony. It is one of the few Home Guard RMMC Regiments authorized. The Regimental Headquarters and barracks are in the hills overlooking the town of Santa Carla and has an impressive view of the Boardwalk and bay.