The Royal Manticoran Marine Corps (abbrev. RMMC) is a component of The Royal Manticoran Navy: The Official Honor Harrington Fan Association, Inc.. Members of this component tend to focus on the Marine Corps aspect of the stories. RMN ships with a sufficient number of members who are Marines may form a Marine detachment, or MarDet. They wear the uniform of the RMMC and are addressed by Marine ranks. 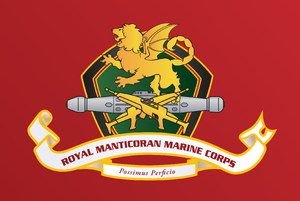 Marine Forces Command, or FORCECOM, is the overall command echelon of the various Marine Detachments, Regiments and Expeditionary Forces of the RMMC.

Corps Directives are issued by the Commandant of the RMMC and apply to the entire branch.

FORCECOM Orders are operational orders issued by COMFORCECOM to specific MarDets and other RMMC units.

The RMMC has a hierarchy of echelons grouping its operational forces:

The largest geographical area division for the RMMC is the Corps:[1]

An Expeditionary Force consists of all Marine units operating within a Naval District and follows the same numbering system.

The First Corps Expeditionary Forces are:

The marines forming part of a Royal Manticoran Navy ship's complement are referred to as a Marine Detachment (MarDet), and may number anywhere from a platoon to a battalion, depending on the size of the ship.

Admiralty Order 1102-13 specifies a hierarchy of echelons for marine and army units including:

These have since been removed as Marine Corps echelon types in TRMN.[1]

Within the context of the Honorverse canon, Marines form an integral part of a ship's crew; they man the ship's weapons, are crucial to damage control and are used for boarding parties or to provide a quick-reaction ground force on a planet's surface. While Marines can be deployed as a garrison force, such arrangements usually last only until they are relieved by Army units.[2]

Marines can be promoted when they have meet the "Time in grade", the "Time in Service" and passed any necessary courses. The courses can be found at the RMMC Enlisted Training Center.