Deprecated: The each() function is deprecated. This message will be suppressed on further calls in /usr/home/vhosts/talbottfleet.org/wiki/includes/MagicWordArray.php on line 197
 Difference between revisions of "Clear Lake" - TRMN

Difference between revisions of "Clear Lake"

The Barony of Clear Lake is a peerage title awarded by The Royal Manticoran Navy: The Official Honor Harrington Fan Association, Inc..

Clear Lake was created as a title on 27 May 2018[1] when then-CDRE Lady Cindy Jeffers was created Baroness Clear Lake at MantiCon in Bloomington, MN. 2018, where he received the accolade from Sharon Weber.

Coat of arms of the Barony of Clear Lake 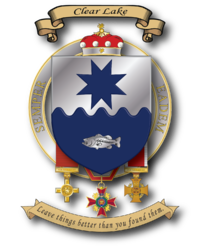 Per fess wavy argent and azure, an Auseklis cross and a trout all counterchanged.

The escutcheon is ensigned with the coronet of a Manticoran Baroness.

Leave things better than you found them

Escutcheon encircled by the riband of the Order of Queen Elizabeth. Pendant from the achievement are representations of the Order of King Roger, the Saganami Cross, and the Conspicuous Gallantry Medal.

Located on Sphinx, Clear Lake is known as a camping and fishing destination. If you want to "rough it" we have some small islands...free of hexapumas... available. There is also glamping, cabin rental, and hotel accommodations in various areas of the estate.

The baroness is the honorary colonel of the Clear Lake Dragoons, a Home Guard infantry regiment of the RMA drawing personnel from throughout the barony.