Deprecated: The each() function is deprecated. This message will be suppressed on further calls in /usr/home/vhosts/talbottfleet.org/wiki/includes/MagicWordArray.php on line 197
 TRMN:Peerage:Front - TRMN

Welcome to the 2019 Peerage Manual!

This wiki has been set up in parallel to the downloadable version of the manual that is available from the Bureau of Supply store.

What is a Peer 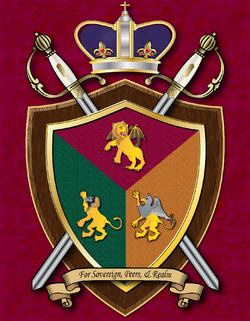 Peerage is defined as “a system of titles of nobility in the Star Kingdom of Manticore, the Imperial Andermani Empire, and the Protectorate of Grayson.” The term is used both collectively to refer to the entire body of titles, and individually to refer to a specific title. Peerage dignities may be recommended by both Houses of Parliament (Commons and Lords) and approved by the House of Lords through its Peerage Courts.

What does it mean to be “a Peer” in TRMN? It has been said Peers are recognized, not made. Members elevated as Peers have shown a higher level of leadership and a commitment to the benefit of the membership and organization, while demonstrating service above and beyond what their rank and position requires.

At one time, getting a peerage was considered another award and nothing more. Many Peers were elevated before there were actual duties and responsibilities. That all changed in 2016 with the creation of the Houses of Parliament Manual (RMN 0-2) that created the House of Lords (and the House of Commons). Both Houses were given certain rights and obligations. Times have changed and becoming a peer is a now an acknowledgment of one’s overall achievements in TRMN and a sign of one’s willingness to continue those activities in support of the organization. Being a peer comes with duties and responsibilities. It is an honor and a responsibility, but it is not an award

The Peerage titles, in order of precedence from highest to lowest, are:

for exceptional service to the organization)

Information taken from Wikipedia is similarly used in compliance with the Fair Use doctrine.

David Weber holds the Copyright to all things related to the Honorverse and as such can at any time demand a change in this documentation, should it violate the Fair Use doctrine.